What States Are Most Concerned About End-of-Life Issues?

States Most Concerned About End of Life
What End-of-Life Topics Are States Searching for the Most?

How concerned are you about end-of-life issues? If you’re like most Americans, then you probably haven’t given the subject much thought. According to a recent study, only 37% of Americans have completed some form of an advance directive, and only 29% of those respondents have living wills.

People don’t like to think of their mortality, but that doesn’t mean they underestimate the importance of end-of-life planning. According to research from The Conversation Project, 90% of Americans agree that discussing end-of-life care with their loved ones is important, yet only 27% actually have the conversation.

States Most Concerned About End of Life 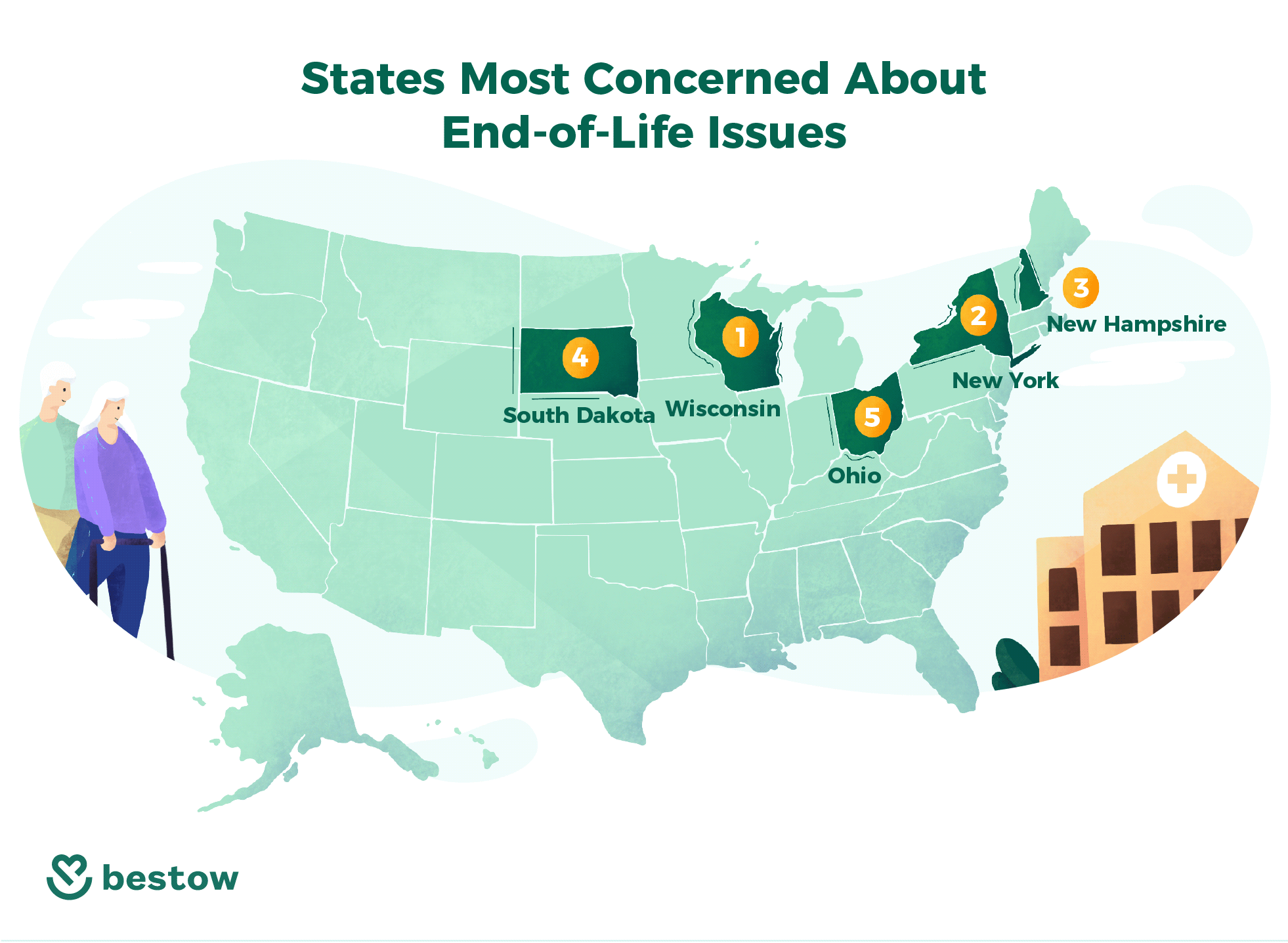 To determine which states are thinking the most about end-of-life issues, we averaged the total amount of search interest in each state for each term. States that were considered “most concerned” showed the highest overall average interest in each topic. Demographic data, like state or senior population, were not considered, but were included into our chart below to paint a more accurate picture of how equipped each state is to handle end-of-life issues.

Based on these figures, we found that the states most concerned about end of life are in the Midwest, with Wisconsin in the lead. New York comes in at a close second, followed by New Hampshire, South Dakota, Ohio, and Minnesota.

The states least concerned about end of life are Nevada, followed by California, Wyoming, Utah, and Alaska. As the state with the highest population and one of the nine states with the most senior citizens, it’s shocking how low California falls on the list. States like Alaska and Wyoming have the least affordable senior support and care services in the country, which could speak to their lack of preparedness for end of life issues.

To see how your state stacks up, browse our list of the ten most — and least — concerned states.

What End-of-Life Topics Are States Searching for the Most? 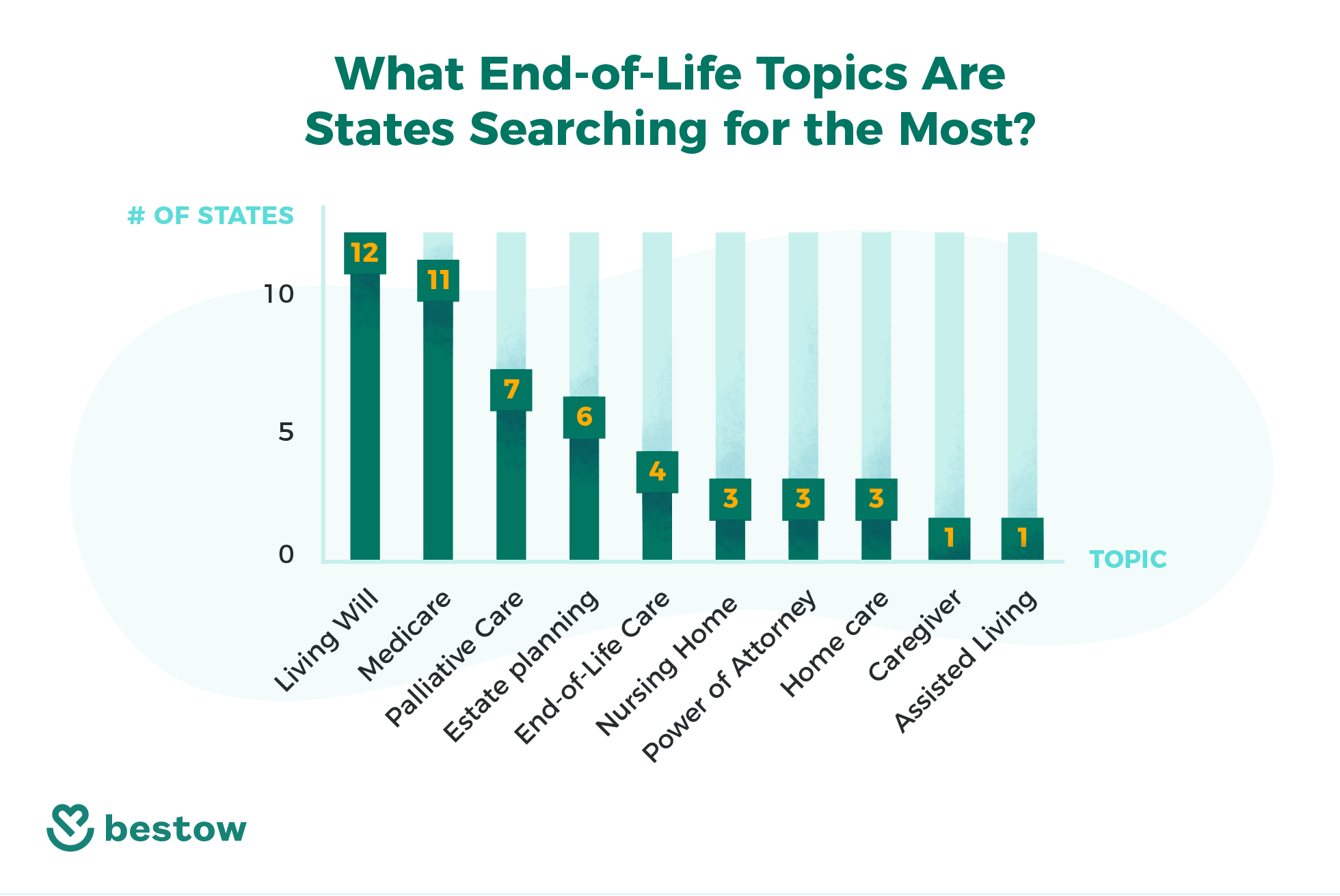 To see what end-of-life topics are trending, we looked at what terms received the most searches in each state. Based on our findings, Americans are most concerned about financing their care and completing advance directives, such as a living will or power of attorney.

Interestingly, states with the highest senior citizen populations in the U.S., such as Florida and California, showed the most interest in these leading end-of-life topics. Out of the ten terms we researched, Florida shows the most concern over living wills and medicare, while California shows an interest in palliative care and medicare.

This could be due to the fact that California has the largest percentage of Medicare enrollees of any state, and will only increase as the elderly population increases. Similarly, Florida’s senior population accounts for roughly 23% of the state’s total population, which could explain the state’s interest in terms like “living will” and “medicare.”

Also of note is the lack of interest each state showed for terms related to assisted living. Specifically, terms like “assisted living,” “nursing home,” and “caregiver” had the lowest results. Given the fact that 90% of seniors prefer in-home care to other long-term care alternatives, the data is not surprising.

Of course, we did observe some surprising results from the data as well. Out of any state, Wisconsin shows by far the most interest in the term “caregiver,” which has the least searches nationally. Other states’ search volume for “caregiver” was less than half as much as Wisconsin’s.

The term “home care,” also a keyword with low interest, ranked the highest in the northeastern states like New York, Pennsylvania, Ohio, and Connecticut, and was the highest searched term in New York and Pennsylvania.

This could possibly be explained by the fact that home care occupations, such as home health aides and personal care aides, are the largest occupational group in cities like New York. As a whole, home care employment is expected to increase by 41% between 2016 to 2026 in the U.S. to meet the demand of the increasing elderly population.

To see what end-of-life issues are top of mind for Americans, we conducted keyword research to determine which topics generated the most search volume. We then inserted those terms into Google Trends, which converts search volumes into interest based on a scale ranging from zero to 100.

As the senior population continues to grow, being prepared for end-of-life issues is essential. Of course, both seniors and millennial parents should make an effort to discuss these topics early in life to ensure that both parties are given the best care in the future, be it financial protection or medical assistance. Unsurprisingly, most Americans don’t think of these issues until they arise, a trend that hopefully changes going forward.

Back to Learning Center